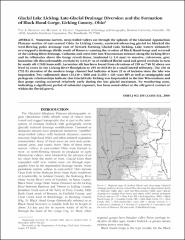 Frolking, Tod A.
Pachell, Matthew A.

Numerous narrow, steep-walled valleys cut through the uplands of the Glaciated Appalachian Plateaus section of east-central Ohio. In Licking County, eastward-advancing glacial ice blocked the west-flowing paleo drainage east of Newark forming Glacial Lake Licking. Lake waters ultimately overtopped a drainage divide south of Hanover causing the erosion of Black Hand Gorge and reversal of the Licking River drainage. Cutbanks and cores into late-Wisconsinan terraces along the Licking River and its tributaries above the Gorge reveal dense, laminated (± 1.0 mm) to massive, calcareous, gray lacustrine silt disconformably overlain by 1.0-6.0+ m of oxidized fluvial sand and gravel overlain in turn by sandy silt (Chili loam soil). Lacustrine silt has been found from elevations of 228 m (748 ft) above sea level in cores in the Licking River floodplain to 255 m (838 ft) in a small lateral tributary. The 230 m (755 ft) elevation of the modern Gorge channel bed indicates at least 25 m of incision since the lake was impounded. Two radiometric dates (33,440 ± 1060 and 21,660 ± 120 years BP) as well as stratigraphic and pedogenic relationships indicate that Glacial Lake Licking was impounded in the late wisconsinan and that gorge cutting occurred relatively early during the last glacial maximum. No weathering zone, indicating a significant period of subaerial exposure, has been noted either at the silt/gravel contact or within the fluvial gravel.