The Scottish Revolution in its International Context, 1639-1640 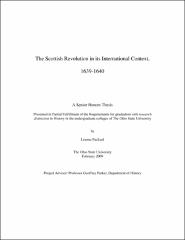 The 17th century was a particularly tumultuous time period, as exhibited by Scotland, England, and France. England was under the leadership of an inept Charles I and was on the verge of a civil war that would culminate in regicide. France was still embroiled in the Thirty Years’ War led by Cardinal Richelieu and Louis XIII. Scotland was undergoing a revolution led by the Covenanters who promoted Presbyterianism over the Episcopacy favored by Charles I, instead choosing to adhere to the Scottish National Covenant of 1638. They also were dealing with the aftermath of the First Bishops’ War and the looming presence of the Second Bishops’ War against Charles’ I, their absent King. The thesis uncovers Scotland’s relationship with foreign powers, particularly France, and to a lesser extent England. It expands upon these relationships as well as their consequences primarily through the use of primary documents and research completed at the National Archives in London and the Scottish National Archives in Edinburgh. Just one of the components of the thesis centers on a 1639 letter written by the Covenanters to the King of France, Louis XIII, seeking aid against the English. This letter has not been highly studied, nor has Scotland’s relationship with France during this time period. Yet the thesis seeks to uncover these complex relationships, and proves that Scotland and France were covertly intertwined from 1639-1640.