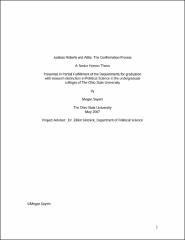 The Supreme Court is the ultimate interpreter of the meaning of the law in the United States. For this reason, nominations and confirmations of Justices to the Supreme Court of the United States have always been an important process. The objective of this thesis is to compare and contrast the confirmation processes of Justices Roberts and Alito, exploring the reasons why the senate roll call vote for the two justices were so different, even though both candidates were confirmed. Justice Roberts was confirmed 78-22, while Justice Alito was confirmed by a 58-42 vote. What accounts for this startling 20-vote difference in the senate’s voting? Essentially, the central hypothesis of the thesis is that several factors contributed to the greater divisions surrounding Alito’s confirmation versus the relative consensus by which Roberts was chosen, despite the fact that both are considered to be strong conservative judges. These factors include the character and personality of the nominees, the timing of their nominations, judicial philosophy, the record created by their prior written opinions, interest group politics and the political balance on the court at the time of their nominations. Further, these factors will be examined in relation to the voting patterns in the two confirmation processes. Following this will be an in-depth examination of the senate roll call vote, placing the Senators into 6 distinct categories. The study will conclude with 4 case studies representing Senators who fall into their respective categories. The case studies will be conducted to illustrate the overall hypothesis for the study.