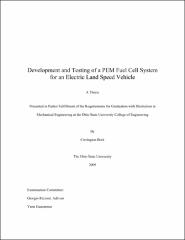 Racing is truly the ultimate test for a vehicle technology. That is why students at the Ohio State University built the Buckeye Bullet 2, the world’s first hydrogen fuel cell powered land speed car. In October 2007, the Buckeye Bullet became the world’s fastest fuel cell powered vehicle reaching a top speed of 360.977 [km/h] (224.301 [mph]). Although this was a remarkable achievement it fell short of the vehicle’s ultimate goal to contend with the original Buckeye Bullet’s battery powered record of 508.485 [km/h] (315.958 [mph]). This thesis investigates the design improvements and testing methodology that the team used to improve on their initial success. The focus is on the fuel cell system and directly related systems. This paper reviews the following 2008 racing season as well as analyzes failures that occurred during the 2008 racing events. Suggestions for further investigation and improvement are also explained.