Solvent effects on photodegradation of the 18-mer of thymidylic acid 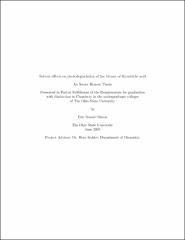 The photodimerization of neighboring thymine residues in nucleic acids caused by irradiation of ultraviolet light can lead to harmful mutagenic products. The 18-mer of single-stranded thymidylic acid [(dT)18] dissolved in various denaturing solvents was used as a model system to determine the rate of this photoreaction. The maximum percents volume of co-solvent in water/co-solvent mixtures of ethanol, trifluoroethanol (TFE), and dioxane in which the molecule was soluble were determined to be 75%, 100%, and 75%, respectively. Solutions of (dT)18 in these solvent mixtures were irradiated with femtosecond pulses of 271 nm light, and UV-Vis absorption and CD spectroscopies were used to monitor the rates of photodimerization. Rates of photodimerization relative to (dT)18 in water were determined to be 0.356, 0.258, and 0.439 for the co-solvents ethanol, TFE, and dioxane, respectively. A qualitative relationship was found between the amount of base stacking observed in the non-irradiated solutions and the rate of photodimerization for solutions containing ethanol and TFE, but this relationship did not hold for dioxane.

Except where otherwise noted, this item's license is described as Attribution-NoDerivs 2.0 Generic