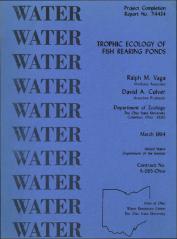 A three year study of the trophic dynamics of fish rearing ponds was conducted at the Hebron National Fish Hatchery, Hebron, Ohio to investigate questions concerning the interaction of various trophic levels in the plankton and to better understand the factors most responsible in determining fish yield. Investigation of the effects of zoop lank ton grazing on the size structure of the phytoplankton indicated that above certain threshold levels of zooplankton biomass, zooplankton grazing can radically change the size structure of the phytoplankton community. Small flagellates were susceptible to both Daphnia and Bosmina grazing whereas small cryptomonads were only removed by Daphnia. The dynamics of resistant algal forms to grazing was not possible to predict at the species level. The presence of filament concentrations in excess of 20% of total phytoplankton volume inhibited the egg production of Daphnia more than that of Bosmina. However, total seasonal reproductive output of both species was due to factors other than filament concentration and the effects of filaments on succession in the zooplankton is questioned. Fish predation was found to affect the per capita egg production of Daphnia and to have a large influence on the species composition of the zooplankton community. High levels of fish predation resulted in Bosmina becoming the dominant grazer but at the same time increase the reproductive rate in Daphnia regardless of species. Analysis of the trophic system in the fish ponds indicated that the zooplankton forage base is consistently under utilized by the fish. The low and variable yields of Northern Pike, Sauger, and Walleye were attributed to mortality of eggs and fry as a result of handling rather than due to resource limitation. We concluded that the production of these species could be increased by a factor of two simply by increasing the number of fry stocked in the ponds. Other recommendations to reduce variability in fish yields were also made. Finally, we suggest directions for further research to refine and improve present management techniques.

This study was supported in part by the Office of Water Resources Technology, U.S. Department of Interior under project No. A-065-OH1O
(print) 81 p. : ill. ; 28 cm.