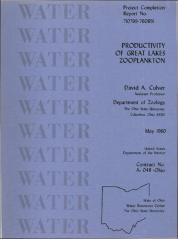 A mathematical model of zooplankton productivity for the Laurentian Great Lakes has enabled us to calculate productivity rates for Cladocera, Copepoda, and Rotifera from Lakes Ontario and Erie. Productivity values from the Bay of Quinte, Lake Ontario, demonstrated that near shore productivity and biomass varied greatly along with algal abundance and temperature. Increasing the loading of phosphorus and nitrogen did not directly result in higher zooplankton and phytoplankton productivity in this eutrophic arm of Lake Ontario. A study of 30 stations in Lake Erie on 10 monthly cruises showed that total productivity of the zooplankton community is strongly correlated with temperature, but that individual taxa varied significantly throughout the season. Productivity in the open water of Lake Erie (1970) was much less than the values observed in the Lake Erie and Lake Ontario near shore zones. We are currently preparing a data set from the Western Basin of Lake Erie for the 1948-49 field year which will allow us to calculate productivity of zooplankton from that year for comparison with current patterns. Comparison of the roles of Copepoda, Cladocera, and Rotifera in the over-all productivity showed that Copepoda predominated in the spring, along with rotifers, but that Cladocera were the most important producers during the summer. Measurements of cladoceran size at first reproduction showed that they reach maturity at a large size in the spring and decline in size at maturity through the summer, with all species declining in size in a synchronous pattern. It is suggested that this pattern results from the combined effects of size-selective predation by fish and competition among cladocerans for food. Similar patterns were observed for copepods.

This study was supported in part by the Office of Water Resources Technology, U. S. Department of Interior under project A-048-OHIO
(print) iii, 60 p. : ill. ; 28 cm.