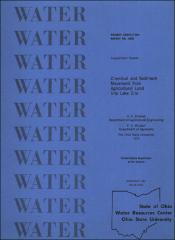 This study was supported in part by the Office of Water Resources Research, U.S. Department of Interior under Project A-023-OHIO
(print) 15 leaves ; 28 cm
This supplemental report includes field measurements and water quality data for the calendar year 1972 which were not included in the project completion report by Schwab and McLean (1972). A more condensed paper was prepared by Schwab, et al. (1973). Water sampling and analyses were continued in 1972 as described in the above reports. Four-year averages (1969-72) and those for 1972 have been included, but not the yearly averages for 1969, 1970, and 1971. The tabulated data in this report have been given the same table numbers as in Schwab and McLean (1972)