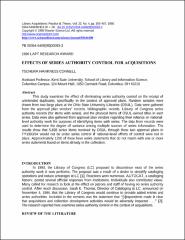 This study examines the effect of eliminating series authority control on the receipt of unintended duplicates, specifically in the context of approval plans. Random samples were drawn from two large plans at the Ohio State University Libraries (OSUL). Data were gathered from the approval plan vendors’ records, bibliographic records, Library of Congress series authority records (for items with series), and the physical items of OSUL-owned titles in each series. Data were also gathered from approval plan vendors regarding their reliance on national-level authority work for purposes of identifying items with series. The data from records were used to determine the degree of variance among multiple sources of series information. The results show that 5,838 series items received by OSUL through these two approval plans in FY1993/94 would not be under series control if national-level efforts of control were not in place. Approximately 1200 of these have series statements that do not match with one or more series statements found on items already in the collection.