Archives in Controversy: The Press, the Documentaries and the Byrd Archives 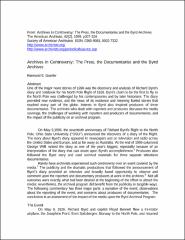 One of the major news stories of 1996 was the discovery and analysis of Richard Byrd's diary and notebook for his North Pole flight of 1926. Byrd's claim to be the first to fly to the North Pole was challenged by his contemporaries and by later historians. The diary provided new evidence, and the news of its existence and meaning fueled stories that reached every part of the globe. Interest in Byrd also inspired producers of three documentaries. The archivist who dealt with reporters and producers discusses the media coverage, the challenges of working with reporters and producers of documentaries, and the impact of the publicity on an archival program.