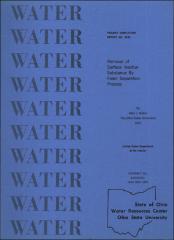 The major findings of an extensive laboratory investigation of the removal and use of hydrolyzable metals in foam separations are described in this final project report. References to the more detailed published reports of the research are also given. The relationships and mechanisms of the foam separation processes of precipitate flotation, foam fractionation, colloid flotation and microflotation are discussed in terms of the aqueous hydrolytic chemistry of the metals examined. These metals included iron(III), copper(II), zinc(II) and lead(II). Aluminum sulfate was used as the coagulant-aggregating agent for the sol studies with the bacterium Bacillus cereus, the clay illite, and colloidal titanium dioxide. The surfactants used were lauric acid, stearylamine, CTAB and sodium lauryl sulfate which are representative of strongly and weakly ionized cationic and anionic collectors. Solution and operating variables that were studied in a batch experimental system included gas flow rate, pH, temperature, ionic strength, surfactant type, and collector and coagulant concentrations. Solution pH was found to be the single most important variable. Gas flew rate was shown to affect the rate but not ultimate removal by foam fractionation. Collector concentration had the opposite effect. As compared to the foam separation of ionic species or discrete sol particles the flotation processes for removing metal precipitates or aggregated sols were found to be more efficient and much less dependent on most of the variables examined. In general, the strongly ionized surfactants are more effective than the weak acid or base types, whereas the choice between a cationic or anionic collector is system dependent. A method based on calculations with hydrolysis constants Is described for predicting metal removals.

(print) v. 50 leaves : ill. ; 28 cm.
This study was supported in part by the Office of Water Resources Research, U. S. Department of Interior under Project A-013-OHIO