Cladophora as Related to Pollution and Eutrophication in Western Lake Erie 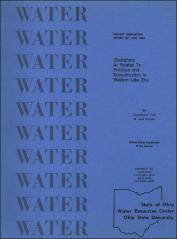 The study covered by this report was initiated because of the wide distribution of Cladophora in western Lake Erie and the possible association it might have with pollution and eutrophication. Little beyond occasional observations has been known about the part this ubiquitous alga plays in the ecosystem. Some believe it to be a relative new-comer that portends increased pollution in the basin, or that it is by itself a prime pollutant. Some are certain that Cladophora in the Lake is directly related to pollution while others feel the relationship is not as clearly understood as some would like to believe

(print) vii, 103 p. illus. 28 cm.
Published in Cooperation with The Center for Lake Erie Area Research.
This study was supported in part by the Office of Water Resources Research, U. S. Department of Interior under Project A-007-OHIO Project A-017-OHIO
Generous accomodations for this Project were provided at the Ohio State University Franz Theodore Stone Laboratory, Put-in-Bay, Ohio, by the Director, Dr. Loren S. Putnam, Hundreds of public agencies are not only efficient vehicles for carrying out our most expressed desires for the Lake, but have been found to be unstinting desseminators of information to whom it may concern. The writers are most grateful for the aid extended by these agencies and for that by numerous individuals who have cooperated.