Celebrating Kyō: The Eccentricity of Bashō and Nampo 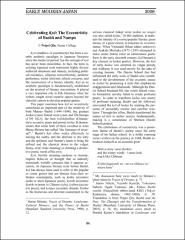 This paper examines how kyō or eccentricity constituted an important part of the creativity of both Matsuo Bashō (1644–1694), the greatest haikai (comic linked verse) poet, and Ōta Nampo (1749–1823), the best kyōshikyōbun (Chinese-style eccentric poem and prose) writer. It demonstrates that while both of them excelled at what Haruo Shirane has called “the literature of reversal”, Bashō’s kyō often works effectively in turning the earthy and the aberrant to the lofty and the spiritual, and Nampo’s tends to bring the refined and the classical down to the vulgar, funny, even crude meaning in claiming a distinctive poetic world of his own.