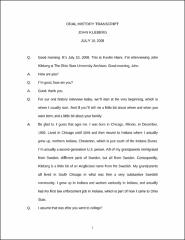 Born in Chicago in 1939 and raised in northern Indiana, John Kleberg attended Michigan State University where he earned a bachelor's degree in law enforcement administration, which was a new program at the time. After serving in the Army, Kleberg worked in several universities' public safety departments, including the University of Illinois where he served as police chief and conducted certification training for local police departments. In 1973 Kleberg came to OSU as associate director of Public Safety. In this role, he ran the operational side of the department. During his tenure, Kleberg helped create training programs to certify the university's police officers for Ohio's new criminal code, instituted a 'team concept' of policing, and had significant roles in the investigations of several high-profile cases, including the university's first on-campus murder. He also was involved in creating the university's white-collar crime investigation unit, which led to his appointment in 1981 as director of the university's internal audit unit of the Office of Business and Finance. Kleberg retired in 2000, but returned to serve on the committee that worked on football game-day security issues. He also became involved in an exchange program with European university facilities planners and designers, and helped start the 'Reducing the Risk' program that records, preserves and restores works of art on campus. Now fully retired, Kleberg spends much of his university-related time raising money and awareness for the ongoing restoration project of university-owned Cooke Castle on Gibraltar Island.