The United States and European Detente: Nixon, Ford, and the Helsinki Accords, 1969-75 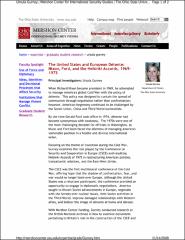 When Richard Nixon became president in 1969, he attempted to manage America's global Cold War with the policy of détente. This policy was designed to contain the spread of communism through negotiation rather than confrontation; however, American hegemony continued to be challenged by the Soviet Union, China and Third World nationalists. By the time Gerald Ford took office in 1974, détente had become synonymous with weakness. The 1970s were one of the most challenging decades for officials in Washington, as Nixon and Ford both faced the dilemma of managing America's vulnerable position in a hostile and diverse international order. Focusing on the theme of transition during the Cold War, Gurney examines the role played by the Conference on Security and Cooperation in Europe (CSCE) and resulting Helsinki Accords of 1975 in restructuring American policies, transatlantic relations, and the East-West divide.

Mershon Center for International Security Studies Graduate Student Research 2007-08
Gurney focuses on four main issues in the relationship between the CSCE and Helsinki conference and American policy making: -- The role CSCE played in containing the Soviet Union. -- The impact of the Helsinki conference on America's relationship with its Atlantic partners, and the emergence of different strategies and competing visions for European stability among Britain and the United States -- The role Helsinki played in the formation of American Cold War strategy, especially how the United States dealt with a fluid world order it no longer controlled. -- The domestic aspects of Helsinki, especially how Ford dealt with the negative perception of détente at home and why he pushed ahead to support the conference.