Cultivating the Masses: Soviet State Intervention in its International Context, 1914-39 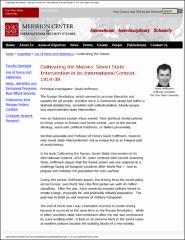 The Russian Revolution, which seemed to promise liberation and equality for all people, resulted not in a Communist utopia but rather a Stalinist dictatorship, complete with collectivization, bloody purges, and unprecedented state intervention. How do historians explain these events? Most attribute Soviet policies to things unique to Russian and Soviet society, such as the Marxist ideology, autocratic political traditions, or Stalin's personality. Mershon associate and Professor of History David Hoffmann, however, sees Soviet state interventionism not as unique but as an integral part of world history. In his book Cultivating the Masses: Soviet State Intervention in its International Context, 1914-39, under contract with Cornell University Press, Hoffmann argues that the Soviet system was one response to a challenge facing all European countries after World War I – how to prepare and mobilize the population for mass warfare.

Research project funded in academic years 2007-08 and 2008-09
The University Archives has determined that this item is of continuing value to OSU's history.