Sudanese Perspectives on the Darfur Conflict 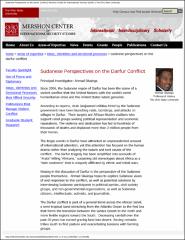 Since 2004, the Sudanese region of Darfur has been the scene of a violent conflict that the United Nations calls the world's worst humanitarian crisis and the United States labels genocide. According to reports, Arab Janjaweed militias hired by the Sudanese government have been launching raids, bombings, and attacks on villages in Darfur. Their targets are African-Muslim civilians who support rebel groups seeking political representation and economic reparations. The violence and destruction has led to hundreds of thousands of deaths and displaced more than 2 million people from their homes. The tragic events in Darfur have attracted an unprecedented amount of international attention, yet this attention has focused on the human drama rather than analyzing the nature and root causes of the conflict. The Darfur tragedy has been simplified into accounts of "Arabs" killing "Africans," sustaining old stereotypes about Africa as a "dark continent" that is uniquely afflicted by ethnic and tribal wars.

Research project funded in academic years 2007-08 and 2008-09
The University Archives has determined that this item is of continuing value to OSU's history.