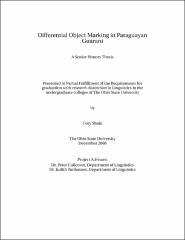 Differential Object Marking (DOM), the appearance of a direct object marker on some but not all direct objects in a language, has been the focus of a substantial body of literature. This study analyzes DOM in Paraguayan Guaraní, a language that has not yet been discussed in the DOM literature. I show that object-marking in Guaraní is differential. I then apply two analyses of the distribution of DOM to a corpus of textual Guaraní data, testing the effectiveness of their predictions against the actual distribution of DOM in Guaraní and comparing the success of each analysis. The ﬁrst analysis is that of Aissen (2003), who proposes prominence as a condition on DOM, where the prominence of an object is how “subject-like” that object is in terms of animacy and deﬁniteness. This prominence-based analysis predicts that highly prominent (subject-like) objects will be object-marked, while low-prominence objects will be unmarked. The second analysis is similar to that of Gerner (2008), who argues that in Yongren Lolo object-marking occurs in clauses in which ambiguity exists as to which NPs ﬁll which grammatical functions. Under this analysis, DOM serves the purpose of disambiguating object from subject. I put both of these analyses to the test against the corpus. I ﬁnd that both are supported, in that neither of their predictions fail for Guaraní. However, I argue that the ambiguity-based analysis is superior to the prominence-based analysis for Guaraní in terms of coverage, testability, and simplicity, and that an ambiguity-based analysis of DOM is therefore preferable in the case of Guaraní.