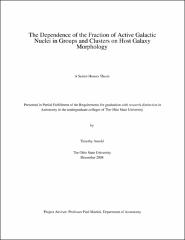 Comparison of the incidence and properties of Active Galactic Nuclei (AGN) in the ﬁeld, groups, and clusters of galaxies can provide new information about how AGN are triggered and fueled, similar to how galaxy environment has been used to study the processes that drive galaxy evolution. As the morphological mix of galaxies varies substantially with environment, and there is evidence that the AGN fraction depends on morphological type, we present the ﬁrst study of the incidence of AGN as a function of galaxy morphology in 11 groups and 5 clusters of galaxies to disentangle the effects of environment and morphology on the AGN fraction. Specifically, we have performed a quantitative morphological analysis of galaxies more luminous than M_R = −20 mag and compared X-ray identified AGN with inactive galaxies. Our analysis suggests that the AGN fraction is higher in groups of galaxies relative to clusters for both early-type and late-type galaxies, and that therefore the previously observed increase in the AGN fraction in groups of galaxies is not solely due to the larger fraction of more gas-rich, late-type galaxies in lower-velocity dispersion groups.