Characterization of Seabed Geometry in a Free Surface Wave Environment 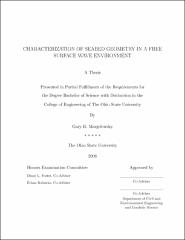 This specific investigation focuses on bed state variability and bed state evolution influenced by free surface gravity waves. Observations of seabed geometry were obtained at the O. H. Hinsdale Wave Research Laboratory large scale wave flume at Oregon State University in 2005. Flow field and seabed geometry data was collected using a submersible Particle Image Velocimetry (PIV) system. Sea bed geometry measurements include: ripple height, wavelength, and radius of curvature. The seabed is determined by the centroid of the maximum light reflection captured by a submerged camera when the bed is illuminated by a laser sheet in the PIV system. Observations were obtained under random wave conditions using a TMA spectrum with significant wave heights ranging from 30 to 50 cm and wave periods in the range of 4 to 8 seconds. The resulting bed geometries ranged from flat to rippled. Over temporal scales as short as one wave period, significant transformations in geometry were recorded. Bedform ripple height was found to be dependent on root-mean-square velocity for wave peak periods of 6 and 8 seconds, and independent of root-mean-square velocity for relatively small peak periods of 4 seconds. Radius of curvature was found to increase with increasing root-mean-square velocity, especially under larger wave height conditions with a significant wave height of 50 cm. Finally, bedform wavelength revealed no trends with root-mean-square velocity, wave peak period, or significant wave height.