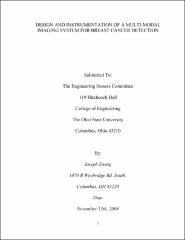 Breast cancer is the leading newly diagnosed cancer among women in the United States and the second leading cause of cancer deaths. This makes accurate and early diagnosis a priority. However there is controversy and problems with current diagnostic techniques such as a lack of functional measurements from Mammograms and MRI’s. Due to these limitations new techniques that overcome these problems such as combined Near Infra-red Ultrasound systems are desired. In this research an integrated dynamic Near Infra-red Ultrasound probe was developed to validate the ability of the system to produce accurate co-registered results. A second generation device was developed to use in a clinical trial that overcame the limitations of the benchtop probe. The benchtop probe produced accurate absorption properties of an embedded tissue simulating phantom. It was also proved that a user could be trained to follow within an accuracy of plus or minus 5% a computer generated pressure profile. These validation tests allowed for the system properties to be optimized prior to the current clinical trial. Future work will include implementing a contrast agent that is sensitive to both Near-Infra red and Ultrasound for better functional and structural measurements. The system could also be integrated with current cancer technology such as RF ablation to measure margins pre-operatively, intra-operatively, and post-operatively.