An Exploration of the Relationship between Planned Golf Course Communities and Developmental Impacts on Suburban, Ohio Cities 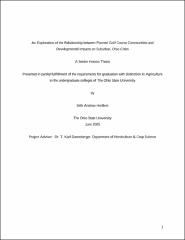 This study was intended to explore the nature of the relationship that exists between golf course housing developments and the municipalities in which they are constructed in terms of their effect on growth and development in those cities. Five Ohio cities were selected for their geographic locations in counties experiencing rapid population changes, and for their similar demographic profiles. City Planners were interviewed in each city to get a first hand look at growth trends and expert observations of the effects of golf courses in their respective cities. Three of the cities, Springboro, Miamisburg, and Centerville; all built public, municipal golf courses with attached, upscale housing developments. The courses were all built with different reasoning and goals in mind, but all had similar results on their communities. Dublin has been home to many privately built, “member only” golf clubs for many years and has seen tremendous growth starting at about the time its first major course was built. Only in the last five years did planning begin for a municipal course in Dublin. Franklin does not have a golf course, and that is by design. Officials in Franklin believe that residential growth is an unnecessary burden on the local government which sustains a revenue deficit on every new house built in the city. The cities that built municipal courses did so for many reasons, but always mentioned were hopes to encourage residential expansion, increase property values, and attract new commercial opportunities. The results of this study would indicate that golf courses do all of those things in communities and, when used properly, can be quite an effective municipal tool. In the private sector, land developers seem to use golf courses as insurance policies for their investments because houses in developments with golf courses sell better than those without. The effects of golf courses, while often fulfilling some municipal goal, can exacerbate a city’s problems if the growth begins to come too fast. The impact is usually first felt by a city’s school district which pays more to educate one student than it can collect from each family’s property taxes. If the growth spurt continues for too long, a city may find itself unable to keep up with costs of providing services and infrastructure to new developments. The nationwide trend of building golf courses with housing does not appear to be slowing. The effects of this phenomenon are generally well known which make it a useful tool when managed properly.

Except where otherwise noted, this item's license is described as Attribution-NonCommercial-NoDerivs 2.0 Generic