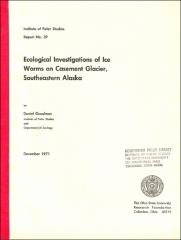 A population of ice worms, Mesenchytraeus solifugus, was observed during the summer months of 1967 on Casement Glacier, southeastern Alaska. Live and preserved specimens wre brought back for laboratory studies. Casement Glacier specimens are distinguishable from previously described populations mainly on the basis of morphology of internal reproductive organs. On snow, the worm's appearance at the surface is mediated by light intensity. Worms were not seen on snowfields not overlying glacier ice. Their distribution on the glacier seemed related to the distribution of snow and ice algae. Counts were made of various algal forms in ice, snow and water samples. The worms ingest algae. Estimates of standing crop and energy flow in the worm and algal populations indicate the plausability of the ice worm's subsisting on the algal productivity. Snow buntings, and probably semipalmated plovers, eat ice worms. Respiration rate of the ice worm is compared with those of other oligochaetes. Results indicate that the ice worm does not maintain a state that would be predicted from low temperature physiological acclimation in a worm normally living at higher temperatures. This suggests an operational distinction between evolutionary ecological adaptation to temperature and physiological adaptation in the individual. The ice worms begin to autolyze and finally disintegrate at 20 degrees C and above.