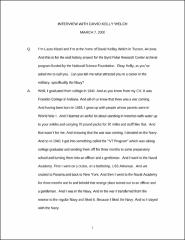 David “Kelly” Welch went to Franklin College in Indiana and graduated in 1940. He then went to the Naval Academy for the “V7” officer training and after three months, became a naval officer. He took a position in Antarctica as Commander of Task Force 43 Operation Deep Freeze. His duty there was to escort various VIPs through the ice. He would spend three out of four weeks on the ice and the other week he would be in New Zealand getting ready for the next group of VIPs. At the time he would also take guest to the South Pole and Byrd Station for visits. During the boreal summer, it was light twenty-four hours. This made keeping a schedule tough but they would put blankets over the windows to create some darkness and the cooks kept a regular schedule which helped also. During his command in Antarctica, Welch had many accomplishments. While there, he was selected by the United States Ambassador to Australia to represent the U.S. in the Coral Sea Celebration in 1971. He was sent to Tonga to convince the King of Tonga not to visit Antarctica, and he accompanied the first women scientists in Antarctica. He was also responsible for establishing a flag for each of the signatory nations in the Antarctic Treaty around the South Pole. He retired from the Navy but then took a job with the Association of Universities for Research and Astronomy in Tucson, Arizona. After five years, AURA moved back to D.C. so he retired again and stayed in Tucson. Major Topics 1. Became Commander of Task Force 43 Operation Deep Freeze in Antarctica. 2. Life there; tough keeping a schedule due to boreal summer (24 hours of daylight). 3. Occasionally took VIP guests to South Pole or Byrd Station. 4. In 1971, U.S. Ambassador to Australia selected him to represent U.S. in Coral Sea Celebration. 5. Accompanied the first women scientists in Antarctica. 6. Established a flag for each of the nations that were a signatory to the Antarctic Treaty.