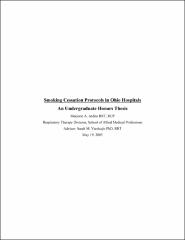 BACKGROUND: The Clinical Practice Guideline for Treating Tobacco Use and Dependence has been shown to be a successful format for clinicians to provide smoking cessation, but there is no research to see how frequently the guideline is implemented in a hospital setting. OBJECTIVE: The purpose of this study is to describe the current practice regarding the use of inpatient smoking cessation protocols in Ohio hospitals, to determine if the protocols are based on the Guideline, and to determine if there are differences in practice. METHODS: A survey research design was utilized in this project. A survey instrument was developed The study population was every hospital registered with the Ohio Hospital Association. The survey instrument was mailed to a respiratory therapy director, or expert indicated by the director, who had knowledge of the current smoking cessation protocol in their hospital. The completed surveys were analyzed with SPSS®, utilizing descriptive statistics, t-tests, and chi square. RESULTS: 122 of the 170 Ohio hospitals consented to be sent the survey and 103 returned the survey, resulting in a 60.6% response rate. 78 hospitals (75.7%) had smoking cessation protocols. 36 (34.95%) were compliant with the Clinical Practice Guideline for Treating Tobacco Use and Dependence. 38 of the 58 respondents (65.5%) stated they believed their protocol was based on the clinical practice guideline. Of those 38 hospitals, only 25 achieved a compliance score of 11 or greater (43.1%) and were truly compliant with the guideline. CONCLUSIONS: The majority of Ohio hospitals have inpatient smoking cessation protocols. Most Ohio hospitals are not taking advantage of the sound, established recommendations in the Guideline to efficiently and effectively address the problem of inpatient smoking cessation. If hospitals were to incorporate the recommendations for 4 interventions for a total of 30 minutes, they would be more likely to also be able to incorporate the 5As, the 5Rs, and discussions regarding pharmacotherapy, all of which seem to be missing from the non-compliant protocols. State-wide education to inform respiratory therapists, administrators and nurses of the usefulness and effectiveness of the Guideline is recommended.