Factors Which Predispose to the Onset of Autoimmune Disease 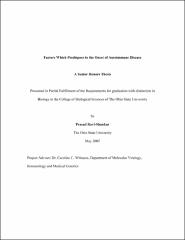 Multiple sclerosis (MS) is a human demyelinating disease of the central nervous system (CNS). Experimental autoimmune encephalomyelitis (EAE) is a commonly used animal model to study MS. EAE is induced by injecting mice with myelin proteins or peptides combined with immunologic adjuvants. The animals direct an immune response against the injected myelin, which results in attacks against their own CNS tissue. T-helper lymphocytes, bearing the CD4 molecule, have been shown to cause EAE. Clinically, the signs observed in mice with EAE are similar to relapsing-remitting MS (RRMS), in which the disease expresses itself in cycles. Mouse strains typically used are the B10.PL, SJL and C57BL/6, which are susceptible to EAE, but show different patterns of clinical disease. In this study, we compared CD4 lymphocyte levels between males and females in each of these three strains to elucidate any immunologic differences either between the sexes or strains. We used flow cytometry to analyze cell populations on the basis of surface marker combinations. SJL mice have lymphocyte populations composed of 54.5% (females) and 51.8% (males) CD4 cells. These values were found to be 20% higher than the CD4 levels of the other two strains, in both sexes. Within a strain, sex based immunologic differences were minimal (<4%). These findings offer one possible explanation for the increased susceptibility of SJL mice to EAE compared with other strains. The findings also suggest that the sexual dimorphism seen after induction of disease is not due to an immunologic predisposition of either sex. The application of these findings will serve to aid future studies in EAE by providing baseline values. More importantly, these results will also be helpful in delineating different human immunologic states which predispose to the onset of autoimmune disease.

This project was carried out in Dr. Caroline Whitacre's Lab in the Department of Molecular Virology, Immunology and Medical Genetics (College of Medicine and Public Health, The Ohio State University).