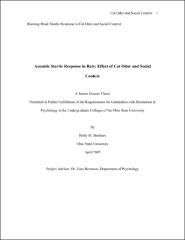 The acoustic startle response is the reflexive response to an abrupt auditory stimulus. In this study it was quantified as maximum movement immediately subsequent to a loud tone. Startle response is enhanced by fear stimuli and is often used as a model for studying anxiety. Because anxiety levels are often dependent on context, the present study examined the effects of social peers and cat odor on startle reactivity. The presence of another rat did not alter basal startle reactivity, but introduction of another rat after shock significantly reduced the increase of startle reactivity that would normally have resulted from shock alone. This suggests an anxiolytic effect of social context in rats. Odor from cat fur was expected to enhance startle, as cats are natural predators of rats. Although there was a modest increase in startle in association with the cat odor, this effect did not reach significance.