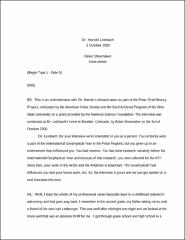 Dr. Leinbach had an interest in astronomy from an early age. His fascination led him to pursue studies in astronomy at the University of Maryland, South Dakota, and at Cal Tech, where he received his master’s degree. At the University of Alaska, the Geophysical Observatory staff resigned leaving a shortage. This convinced Leinbach to apply to the Geophysical Institute. He got the job and moved to Alaska to work on projects observing the aurora. He talks about various ways to document and view them. Leinbach was drafted in 1953 and assigned to the Rocky Mountain Arsenal where his group was responsible for the manufacture of nerve gas. He conducted testing to see if the nerve gas was good or bad. After his discharge in 1956, he went back to the Geophysical Institute. In the summer of 1956, he helped to develop a new instrument for measuring ionospheric opacity called the riometer. In October 1957, he traveled to King Solomon and Unalaska to gather data with the riometer. Leinbach talks about his experiences there. The Geophysical Institute also gave the riometers to other colleges as well as Sweden. The institute installed riometers at the Air Force in Thule, Farewell, and Fort Yukon. While working for the Geophysical Institute, Leinbach was also pursuing a Ph.D. in geophysics. The Geophysical Institute was involved in researching and publishing papers about their measurements and their findings on polar cap absorption. They were invited by the University of Iowa to show the warnings of the occurrence of the events by the riometer data. He talks about the experiments that went on there as well as the results. Leinbach mentions a major polar cap absorption event on May 14th, 1959 in Minnesota. This event received major recognition and press. He describes the increase in technology that increased the amount of solar information available and generated interest about the subject. After finishing his thesis in 1962, he received a job at the University of Iowa. For four years at Iowa, Leinbach was involved in a variety of projects. After that, Leinbach moved to Boulder and worked for the Space Environment Laboratory of NOAA. During his career, one of his experiments entailed making artificial auroras. He retired in 1993. • Leinbach’s professional career began with his childhood interest in astronomy. • He began college at the University of Maryland and after a year transferred to South Dakota State College. • Began observing and drawing sun spot activity daily while in South Dakota. • When in South Dakota Leinbach joined the American Association of Variable Star Observers. • Leinbach built a spectrohelioscope in the summer of 1949 in order to graduate from South Dakota. • Leinbach enrolled in Cal Tech in 1949 and graduated in 1950 with his Master’s Degree. • Leinbach received his job at the Geographical Institute at the University of Alaska after graduating from Cal Tech. • In 1953 Leinbach was drafted and assigned to the Rocky Mountain Arsenal in Denver, Colorado where nerve gas was manufactured. • Leinbach was discharged January of 1956 and returned to the Geographical Institute where he became involved with the cosmic radio study program. • During the summer of 1956 Leinbach worked with George Swenson on the design of the riometer. • Record-breaking solar flares occurred on February 23, 1956. • By February 1957 the riometer was complete and commercial units were built and distributed through out that year. • In October 1957 Leinbach and a team went to King Solomon and Dutch Harbor to install a riometer and auroral radar equipment. • Another riometer unit was installed in Thule for the Air Force, which they called the geopole station, this station was critical for monitoring polar cap absorption. • In 1956 Leinbach began working on his PhD. jointly with the University of Alaska and the Institute. • In January of 1958 Leinbach and Gordon Little published the first major paper out of the Geophysical Institute called “Some Measurements of High Latitude Ionospheric Absorption Using Extraterrestrial Radio Waves.” • Collaboration with NASA helped NASA measure the mass of solar proton waves in order to protect its astronauts, satellites and shuttles from dangerous radiation. • Riometers were never patented. • Leinbach finally received his PhD. in 1962. • Leinbach joined Van Allen’s team at the University of Iowa. • Leinbach moved to Boulder, Colorado in June of 1966 where he finished his career with the Space Environment Laboratory of NOAA. • Leinbach retired in 1993.