Development of a New Method for Calculating Viscosity at High Pressures 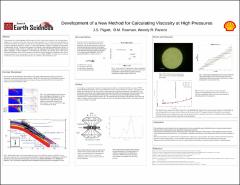 Fluids released by a subducting plate 100 km below the Earth’s surface cause melting in the overlying mantle, leading to arc volcanism, such as that found in the Andes Mountains. The viscosity of the released fluid is a first-order constraint on the transport of material from the plate to the mantle. Accurate determination of fluid viscosity at appropriate pressures (>30 kbar or 3 GPa) and temperatures (~800C) is hampered by the geometry of high-pressure devices. The goal of this research is to construct a new method for quantifying the viscosity of water at pressures similar to those in subduction zones. By observing the Brownian motion of polystyrene spheres suspended in fluid contained in a diamond anvil cell (DAC), the viscosity of the fluid can be calculated. Preliminary results yield an accuracy within half an order of magnitude of published values. Future experimental plans involve measuring the viscosity of water up to 3GPa and 800C. To further mimic conditions of subduction zones, dissolved hydrated minerals such as chlorite will be added to the water.