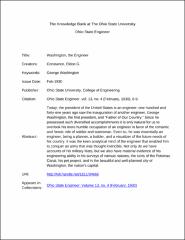 Today, the president of the United States is an engineer; one hundred and forty-one years ago saw the inauguration of another engineer, George Washington, the first president, and "Father of Our Country." Since he possessed such diversified accomplishments it is only natural for us to overlook his more humble occupation of an engineer in favor of the romantic and heroic role of soldier and statesman. Even so, he was essentially an engineer, being a planner, a builder, and a visualizer of the future needs of his country. It was the keen analytical mind of the engineer that enabled him to conquer an army that was thought invincible. Not only do we have accounts of his military feats, but we also have material evidence of his engineering ability in his surveys of various natures, the ruins of the Potomac Canal, his pet project, and in the beautiful and well-planned city of Washington, the nation's capital.