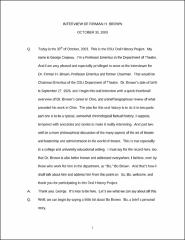 While working on a journalism degree at the University of Montana, Firman Brown developed an interest in the theatre. This interest in the theatre lead to a professional career in which, Brown was a founding member of the Bigfork Summer Playhouse. After living and working in Montana, Brown continued his career in New York by bringing together Ithaca College and its neighbor, Cornell University, to create the Hangar Theatre, a summer theater housed at an old airport. After roughly 10 years at Ithaca, Brown spent two years at Rollins College in Winterpark, Florida, and then moved to Ohio State in 1981. Once at Ohio State he succeeded in winning accreditation for the theatre program. Under his direction, Ohio State also became a member of the University Resident Theatre Association (URTA), a consortium of about 35 theaters across America. Brown served as URTA president from 1987 to 1990, and president of the National Association of Schools of Theatre from 1990 to 1993. He also organized the Theatre Roundtable of Central Ohio