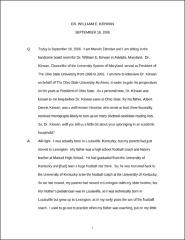 Dr. William Kirwan, President of Ohio State University from 1998 to 2002, was born in Louisville, Kentucky. William, usually known as "Brit," graduated from Kentucky, and earned his doctorate in mathematics from Rutgers. Kirwan started his academic career at the University of Maryland. Over time he moved from his position as Professor of Mathematics to President of the University. As his reputation grew, he received relocation offers at various times, all of which he declined. But given the highly effective recruiting of Ohio State, Kirwan cautiously agreed to accept the offer of its presidency. Perhaps the greatest achievement of his administration was the new Academic Plan. Kirwan believed strongly that Ohio State, as a major research center, could play a major part in transforming the greater Ohio economy from manufacturing to the knowledge industries. He urged a closer collaboration between industry leaders, especially in science and technology, and the research leaders of the university. To this end he established the Greater Columbus Technology Leadership Council, a committee of twelve members representing both industry and the university. Kirwan favored collaboration, consensus-building, openness, and inclusiveness. In the end, he was conflicted by his decision to leave Ohio State and return to Maryland as President. As he prepared to depart Ohio State he was greatly honored when the Board of Trustees renamed the Institute for the Study of Race and Ethnicity in the Americas as the Kirwan Institute