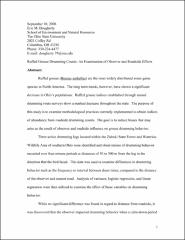 Ruffed grouse (Bonasa umbellus) are the most widely distributed avian game species in North America. The long-term trends, however, have shown a significant decrease in Ohio’s populations. Ruffed grouse indices established through annual drumming route surveys show a marked decrease throughout the state. The purpose of this study is to examine methodological practices currently implemented to obtain indices of abundance from roadside drumming counts. The goal is to reduce biases that may arise as the result of observer and roadside influence on grouse drumming behavior. Three active drumming logs located within the Zaleski State Forest and Waterloo Wildlife Area of southern Ohio were identified and observations of drumming behavior recorded over four-minute periods at distances of 50 to 300 m from the log in the direction that the bird faced. This data was used to examine differences in drumming behavior such as the frequency or interval between drum times, compared to the distance of the observer and nearest road. Analysis of variance, logistic regression, and linear regression were then utilized to examine the effect of these variables on drumming behavior. While no significant difference was found in regard to distance from roadside, it was discovered that the observer impacted drumming behavior when a calm-down period was examined at distances of 100 and 50 m. The mean interval for the first four-minute observation period was substantially longer than the second and third at the same distance, thus confirming that the use of a calm-down period is effective in reducing error due to the presence of an observer (Period 1 = 391 seconds, Period 2 = 233, Period 3 = 238). These results indicate that observation of a calm-down period prior to data being recorded could improve survey methods by increasing detection.