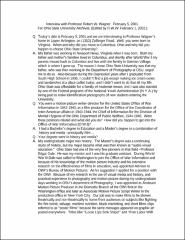 International Congress of Schools of Cinema and Television (CILECT)

Professor Robert Wagner led a long, varied, and distinguished career at Ohio State in the field of photography and filmaking. He grew up in Columbus, and studied at OSU. During WWII, he worked on films with the Office of War Information, and then in South America. Returning to Ohio, he worked in Educational Research and at the Ohio Department of Public Welfare, particularly working to improve mental health education in the state. During his career at OSU, Prof. Wagner worked on a number of different filmmaking projects, as well as projects outside OSU, such as for the United States Information Agency. He discusses preservation of older film and photographic equipment; his strong interest in Latin America; his long association with the American Film Institute (AFI); and the organizational history of photography at OSU