Crinoids in Lilliput: Morphological Change in Class Crinoidea across the Ordovician-Silurian Boundary 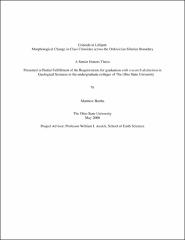 The Ordovician-Silurian (O-S) transition marks the second most catastrophic mass-extinction event to impact life on Earth. A rapid global cooling event led to a glacial epoch that devastated biological communities around the world, leaving a depauperate group of survivors to diversify and repopulate the biosphere. In this project we address how members of the Crinoidea (Phylum Echinodermata) responded morphologically to the ecological stressors at the end of the Ordovician. In addition to suffering a mass extinction and undergoing a macroevolutionary faunal change, crinoids experienced a morphological response of severe reduction in body size, an evolutionary trend recently termed “The Lilliput Effect.” To test this hypothesis, crinoids from the Ordovician-Silurian stratigraphic sections on Anticosti Island, Quebec are examined. Anticosti Island has the best-preserved shelly fossil record through this evolutionary boundary. This class-wide shrinking was documented by measuring the width and length of fossil crinoid calyxes from before, during, and after the O-S transition. These data were then used to calculate the volume of individuals. An 85% reduction in body size is documented during the mass extinction interval. Nonparametric statistics are used to demonstrate significant or not significant body size reductions through the Anticosti section. After this interval, average body volume increased by 1074%. The Lilliput Effect has been documented in more recent mass extinctions (Late Cretaceous, Late Eocene), but never observed in any group of organisms from the Paleozoic Era. This Lilliput response does not correlate to changes in depositional environments through the Anticosti section. It is presumably a biological response to a collapse in the biosphere, but whether this is a global paedomorphic shift or a product of more local selective factors is unclear. To test this question, the manifestation of the Lilliput Effect among “winning” and “losing” crinoid clades across this macroevolutionary change is evaluated.