An Index of Publisher Quality for the Academic Library 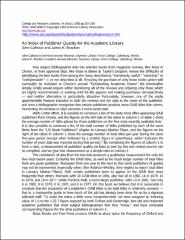 Any subject bibliographer who has selected books from magazine reviews, like those in Choice, or from approval slips, like those in Baker & Taylor's program, knows the difficulty of identifying the best books from among the many described as "immensely useful," "essential," or "indispensable" — or not described at all. Ensuring the purchase of only those books which will eventually be included in Choice's annual "Outstanding Academic Books" list (hereinafter simply OAB) would require either monitoring all of the reviews and ordering only those which are highly recommended, or waiting until the list appears and making purchases retrospectively — and neither alternative is particularly attractive Fortunately, however, one of the easily apprehensible features included in both the reviews and the slips is the name of the publisher, and once a bibliographer recognizes that certain publishers produce more OAB titles than others, monitoring the reviews or slips becomes a much easier task.