Interview of James A. Van Allen by Brian Shoemaker 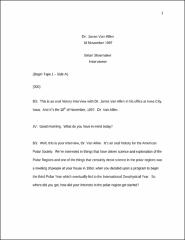 Dr. Van Allen is a distinguished physicist and a leading researcher on interplanetary satellites. He is known for helping to organize the International Geophysical Year in 1957-58. As a young student at Iowa Wesleyan University in 1931, Van Allen developed a strong interest in physics under the guidance of Thomas Poulter. Poulter was the chief scientist and second in command for the Second Byrd Expedition to Antarctica in 1933. As an undergraduate, Van Allen learned to make observations of the magnetic field of the Earth using a magnetometer, and was introduced to the science of geophysics, his lifelong passion. He also did original scientific work on the Perseid meteor shower of August 1932. After graduating from the University of Iowa in 1939 with a Ph.D. in nuclear physics, he joined the Carnegie Institution as a Research Fellow, where he helped develop a radio proximity fuse for use in naval long-range anti-aircraft guns. He developed one of the basic features of the vacuum tube that was the heart of the fuse. In November 1942, he and two co-workers were commissioned as naval officers to go out to the fleet and accompany an initial shipment of these proximity fused projectiles. His personal responsibility was for the destroyers. Van Allen discovered that the success rate of the fuses was compromised by the early deterioration of the batteries, and was responsible for setting up re-battery depots on a wide scale in the Pacific. His navy career ended in May 1946. Van Allen returned to the Applied Physics Lab as a civilian, and did considerable research on high altitude rockets, including captured German V-2 rockets. He oversaw development of the Aerobee, a high-altitude Navy rocket. This rocket has no active guidance system, and Van Allen and his team successfully made adjustments to insure that it would not deviate from its approved range at the White Sands Proving Ground. He also continued research on cosmic rays, atmospheric ozone, and high altitude photography. On April 5, 1950, Van Allen invited several friends, all distinguished scientists, to his home for a dinner party at Silver Spring, Maryland. The group included Sydney Chapman, a British geophysicist, Lloyd Berkner, and Wallace Joyce. It was here that the very first plans were laid for what became the International Geophysical Year (IGY). The men agreed that the general assessment of geophysics was moving along so rapidly that it would be desirable to plan the IGY for 1957-58, on the 25th anniversary of the first Polar Year. As it happened, this was also a year of expected maximum solar activity. The IGY was a non-governmental enterprise made up of independent scientific organizations. In the United States, the National Academy of Sciences was the principal society, and the National Science Foundation and the U.S. Navy provided the principal governmental support. Van Allen belonged to several committees of the IGY, and chaired the Working Group on Internal Instrumentation. He was responsible for soliciting and selecting the experiments which were to be conducted on the satellite itself. Polar exploration in both the Arctic and the Antarctic received an enormous stimulus from the IGY. Operation Deep Freeze, which established the Antarctic continent as a major area of scientific exploration, was a major consequence of the IGY. The Antarctic Treaty was another direct outcome of the IGY. Van Allen made three polar expeditions for scientific purposes. In 1952, with the support of the Office of Naval Research he devised and successfully developed techniques for launching a rocket from a balloon at some 50,000 to 60,000 feet of altitude. The device, called a rockoon, which was launched in 1953 from the Coast Guard cutter Eastwind, reached altitudes of 250,000 feet. It made valuable discoveries in the Arctic region, including cosmic ray measurements, and the discovery of the auroral soft radiation zone. Similar experiments were later conducted along the equator and in Antarctica. At the University of Iowa, Van Allen, working with colleagues and in close touch with his friend Wernher van Braun, of the Army Ballistic Missile Agency in Huntsville, Alabama, developed the scientific payload for Explorer I, the first successful American satellite. The flight was a great success, and resulted in the discovery of the radiation belts of the Earth, later named the Van Allen belt. He was the co-discoverer of the radiation belts of the planets Jupiter and Saturn. Van Allen commented as to how much his research field has changed over the years. For example, he and others worked for years in the early 1950’s using balloon launched rockets (rockoons) to complete a very good latitude survey in both the Arctic and Antarctic regions. Today, using polar satellites, the same mapping can be done in 45 minutes. He never personally returned to the Polar regions. Since 1958 Van Allen’s entire career has been in satellite and spacecraft observations. He had instruments aboard Mariner II to Venus in 1962, Mariner IV to Mars in 1964, Mariner V to Venus in 1965, and the first missions to Jupiter and Saturn on Pioneer 10 and 11. He has also kept very busy with research, and continues to train graduate students. As recognition of his long, productive career, Van Allen has been awarded the Nansen Medal for his contributions to Arctic geophysics, radiation belt physics, and the exploration of the aurora by rockets and satellites. Major Topics Van Allen’s long career in polar and inter-planetary astro-physics International Geophysical Year (IGY) Development of balloon launched rockets (rockoons) Research on radiation belt physics and exploration of the aurora Contributions of satellites in global and interplanetary research The Van Allen radiation belts