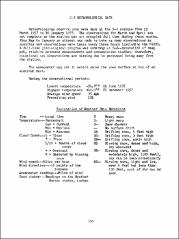 The data presented in this volume were collected by the glaciological staff of Wilkes Station during the period 1 February 1957 to 25 January 1958. The personnel were: Richard L. Cameron, chief glaciologist, The Ohio State University, Columbus, Ohio; Olav H. Løken, glaciologist, University of Oslo, Norway; John R. T. Molholm, glaciologist, Tufts University, Medford, Massachusetts. Wilkes Station was established on a bedrock promontory on Clark Peninsula, Windmill Islands, during 1-16 February 1957, Figs. 1 and 2. The position of the base is latitude 66°l5.5', longitude 110°31.2'. On earlier Hydrographic Office maps, Clark was shown as an island but thiswas disproved when the area was investigated. The “island” is connected to the ice sheet by an ice ramp and an occasional outcrop of bedrock, Figs. 3 and 4. This ice ramp afforded access to the ice sheet for the glaciological party. The main aim of the glaciological program was to determine the regimen of the glaciers in the Budd Coast area by studying accumulation, ablation, and movement. To determine accumulation trends for the past decades, a deep pit was excavated in the firn at a site located 50 miles inland at an elevation of 1139 meters, Fig. 5. This site is designated as S-2. The pit is 2 meters square and 35 meters deep. A 27-meter bore hole at the bottom gives a total depth of investigation of 62 meters. A horizontal deformation tunnel was also made at the 30-meter level. The S-2 station also served as a meteorological station and observations were made from13 March 1957 to 16 January 1958. See Fig. 6 for a sketch of the S-2station. A system of accumulation stakes was set out in the area and this system was also triangulated to determine any relative movement. Between the S-2 station and the main base a series of snow pits were dug and accumulation stakes were emplaced. On the ice ramp five miles inland from the main base and at an elevation of 247 meters, thermohms were set in the ice to a depth of 16 meters. The temperature of the ice at the different levels was recorded once each week. A thermograph was also set up at this site to record air temperatures and stakes were emplaced over the area to measure snow accumulation. To the south of the Windmill Islands the Vanderford Glacier flows into Vincennes Bay, Fig. 7. Stakes were set out upon the ice and were triangulated from the extremities of a base line established on Haupt Nunatak. The stake nearest the center of the glacier moved at a rate of 2.1 meters per day for the period 23 October - 10 January 1958. This is a high rate of movement as compared to other glaciers which have been measured in the Antarctic. A study was also made of glacial geology and striae, chatter marks, erratics, and elevated beaches were found. Samples of the bedrock and lichens were collected. John Hollin, the second year glaciological leader, has kindly allowed use of elevation figures which he determined on the S-2 trail.