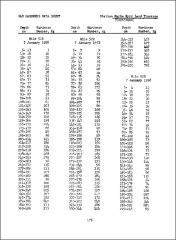 This report concerning the glaciology of a portion of western Antarctica, Marie Byrd Land, is presented in three sections. The first section records the observations made along a 64O-mile over-snow traverse from Little America to Byrd Station during February 1957. The second section contains observations made during a wintering-over period in 1957 at Byrd Station. The final section contains data collected during a 1957-58 over-snow traverse to the north and east of Byrd Station. Traverse route map is found in pouch at the end of this report. Glaciological field observations were conducted by Vern Anderson and Mario Giovinetto throughout the Little America-Byrd Station Traverse and the wintering-over period at Byrd Station, Glaciological observations were conducted on the Marie Byrd Land Traverse by Vern Anderson and William Long. Special acknowledgment is made to Norbert Helfert, a Byrd Station meteorological observer, who assisted in traverse glaciological studies during the first two weeks of the Marie Byrd Land Traverse. This report was prepared by Vern Anderson, glaciologist at Byrd Station during 1957-58, under the direction of Dr. Richard P. Goldthwait and Mr. Richard Cameron, at the IGY Glaciological Data Reduction Office, The Ohio State University Research Foundation, Columbus, Ohio.