Interview of Robert A. Helliwell by Brian Shoemaker 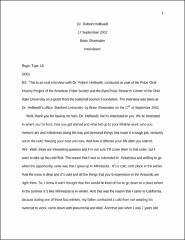 Dr. Helliwell was born in Minnesota and moved to California with his family at the age of seven after his father died. In 1938, he enrolled at Stanford University. His part-time job was to record Radio Saigon (Japanese propaganda) on a dictaphone with a wax cylinder. He learned to build his own receivers for the local ham radio station. His professor of electrical engineering was interested in the ionosphere and radio transmission, He became interested in the whistlers on a telephone receiver. Later he studied whistlers produced by atomic detonations. Dr. Helliwell designed experiments to study whistlers in Antaretica during the IGY. This work led to dictionary of the nose whistler. He describes establishing bases in the Antarctic and Arctic for collecting whistler data. They also determined that there were no whistlers at the equator, A dipole antenna, high-wave in length, was installed twenty feet above the Antarctic ice. The experiments with Siple I had modulation restrictions. The station’s building was 320 feet long. They found out that the interaction of the transmitter with particles in the magnetosphere produced a huge field. The signals were received in Roberval, Quebec. The top power signal excited four paths. As the power was decreased the paths disappeared, one by one. The antenna was forty kilometers long and supported on poles every 200 feet. A second 40 kilometer antenna formed a cross with the first. The station operated from 1973 through 1988. In retirement he has been publishing papers and writing a book. Major Topics • At the age of seven, he and his family moved to California from Minnesota because his father died of pneumonia. • His mother became a librarian in Palo Alto. • During the depression, his grandparents moved from Minnesota to live with his family. • He entered Stanford University in 1938. • A part-time job recording Japanese propaganda for the Hoover Institution, which led to an interest in Ham Radio. • He was employed to measure the reflections of radio waves from the ionosphere. • He gave a lengthy description of whistlers and “down chorus”. • Sometimes he used long telephones and barbed wire fences to hear spherics and whistlers. • His involvement in detecting atomic bomb blast is summarized. • In 1956, he was invited to study whistlers in Antarctica as a part of IGY. • Described excitement associated with finding the nose whistler. • In mapping the magnetosphere, they located the plasma pause. • Helped design equipment to prevent radiation noise for special experiments. • Whistler measurements were coordinated between both Polar Regions, for two minutes each hour. During special events, such as the atomic bomb, data was continuously collected. • The rate of whistlers versus latitude was determined by the equipment on a ship, El Tannin. • Used NASA satellite to observe VLF waves. • Wire antennas had to be located more than 20 feet above the ice. • Found that radio pulses grew slowly in amplitude exponentially with time. • Siple Station is described.