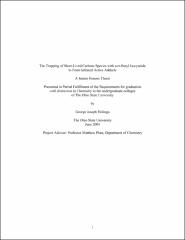 A technique was developed for trapping infrared inactive carbenes with a standard reagent to produce infrared active adducts that can be directly observed using nanosecond time-resolved infrared spectroscopy. A complication of measuring the generation, presence, and reactivity of carbene species is that these transient species often have very short lifetimes (τ ≤ 500 ns) and do not strongly absorb infrared radiation. While several standard methods such as laser-flash photolysis exist for measuring reaction kinetics of these transient structures using ultraviolet-visible wavelengths, currently a standard method for monitoring highly reactive carbene species at infrared wavelengths does not exist. The ability to directly observe such species with infrared wavelengths would be particularly helpful because vibrational spectra can be used to provide chemical structural information far beyond that of ultraviolet-visible (electronic) spectroscopy. Nanosecond time-resolved infrared spectroscopy was conducted on a solution of a dibromocarbene precursor (31 mM) and tert-butyl isocyanide (TBI) (0.53 mM) in CH2Cl2 and the resulting infrared active adduct was observed at 2040 cm-1. The formation of this ketenimine species enabled the lifetime of dibromocarbene (DBR) in CH2Cl2 to be determined by nanosecond time-resolved infrared spectroscopy (τ = 8 ns). The structure of the infrared active species was confirmed by Density Functional Theory calculations (B3LYP/6-31G*) which predicted the infrared absorbance of the ketenimine adduct formed in the reaction of TBI and the infrared inactive DBR species at 2050 cm-1 after scaling by a factor of 0.9614.1 The lifetime of singlet dibromocarbene (1.05 mM) in CH2Cl2 was subsequently confirmed using laser flash photolysis spectroscopy at the visible wavelength of 482 nm for data verification purposes (τ = 35 ns). The nanosecond time-resolved infrared spectroscopic technique was found to provide a dibromocarbene lifetime in CH2Cl2 that was in fair agreement with laser flash photolysis UV-Vis experiments. However, the TRIR experiments were conducted using a dibromocarbene precursor solution five hundred times more concentrated than that of the LFP experiments. Dibromocarbene can react with precursor, thus its lifetime (zero [pyridine]) is expected to be shorter in TRIR than in LFP experiments. In conclusion, the dibromocarbene trapping technique utilizing the infrared activity of its ketenimine adduct was successfully employed, and the experimentally determined dibromocarbene lifetime was independently verified by laser flash photolysis experiments.