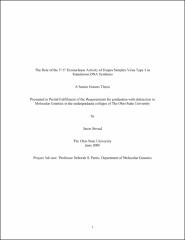 Accurate copying of DNA is vital for maintaining genome integrity and organismal viability. The associated 3’ to 5’ exonuclease (exo) activity of herpes simplex virus (HSV) DNA polymerase (pol) has been shown to play multiple roles in DNA replication error avoidance. The pol-associated exo activity has been shown previously to prevent nascent strand extension in the presence of damaged primer terminus by causing futile cycles of incorporation and excision of nucleotides at the damage site. To further characterize the interaction between the exo and pol domains of the HSV pol catalytic subunit, the ability of exo-deficient (exo-) and wild-type (wt) pol to extend a DNA primer on a template containing an apyrimidinic (AP) site was assayed. We hypothesized that the communication between the exo and pol domains would allow the enzyme to “look back” to detect an error even after it has replicated through it. To this end, primers were constructed such that their termini were one to 3 nucleotides downstream of the AP site. On an undamaged template, there was no significant difference in the abilities of wt or exo- pol to fully extend the primer. A primer/template containing up to three nucleotides downstream of the AP lesion presented a barrier to extension by both wt and exo- enzymes. However, the efficiency for extension was greater for the exo- enzyme. These results suggests that a functional exo activity is not required to sense an AP lesion, but rather, works to reinforce the kinetic barrier such a lesion presents to the polymerizing activity. Moreover, the kinetic barrier extends up to three nucleotides beyond the lesion itself.

Except where otherwise noted, this item's license is described as Attribution-NonCommercial-NoDerivs 2.0 Generic