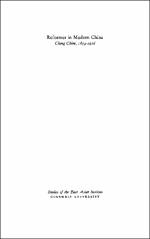 Studies of the East Asian Institute

Very few scholarly biographies of Chinese leaders are available in Western languages. Chang Chien, the subject of Professor Chu's fascinating study, was a most unusual Chinese: a truly transitional figure standing astride the late imperial era and the modern day. Although eminently fitted for a distinguished official career, he forsook officialdom to become a modern entrepreneur. Yet he was a most unusual entrepreneur in devoting the profits from his successful businesses to the modernization of his native community. With an excellent traditional education, he devoted most of his talents to the problems of bringing his country into the modern world.