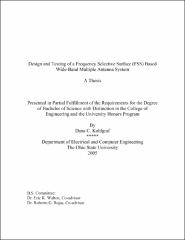 Since the first radio link was built by Hertz in 1886, antennas have become a critical technology which allows people to stay connected and informed. Several advances have been made in the field of antenna theory and technology in the past hundred twenty years. Among them is the characterization of frequency selective surfaces (FSS), which are periodic arrays of passive elements or slots that act as a band stop or a band pass filters respectively to propagating electromagnetic waves. The purpose of this project was to construct an antenna which is transmissive outside of the band of operation. For example, the antenna designed in this project operates in a band of 1-2 GHz. The goal of this project is to be able to place an antenna operating at 4-8 GHz behind this antenna and have it be able to “look though” the first antenna as if it wasn’t there. This will allow the user to stack antennas one behind the other and thus increase the density of antennas in a given area. This is advantageous in applications where the available real estate upon which to place antennas is limited, such as on ships and submarines. This antenna has two main components - an array of radiating elements and a reflector. The radiating array will be transmissive at 4-8 GHz as long as it does not radiate energy at this frequency and does not significantly scatter energy. These constraints are easily met by creating an array of wire elements. Reflectors, on the other hand, are commonly composed of a solid metal plate, which will reflect energy at any frequency. However, this project uses an element FSS for a reflector. As a result this reflector will only reflect energy in the stop band. Sufficiently outside of this band, it will be transmissive. While an entire antenna was designed for sake of completeness, the focus of this project was the design and testing of the FSS reflector. There were two main components to this project. The first was to use computational codes to design the antenna. Specifically, the antenna was designed using a Method of Moments (MoM) code, which calculates gain patterns for finite antennas. These results were then compared to a periodic moment method code, which calculates the ideal result for an infinite structure. This design process was completed in several steps. First the FSS array was designed to be reflective in the L band (1-2 GHz) and transmissive outside of this band. Following this the radiating array was designed to realize sufficiently flat L band bandwidth. The FSS reflector and radiating array were then combined together and the gain and transmissivity were then calculated for the entire antenna. Finally a prototype of the FSS reflector was built and tested. Time constraints prevented the construction of the entire antenna. The results of these tests are in very good agreement with each other. MoM tests show the FSS is within 1 dB of perfect reflectivity over the entire L band range. The prototype was within 2 dB of perfect reflectivity over the same range. This deviation is explained by unavoidable human error in the construction of the FSS. The periodic moment method code is also computed similar results. The bandwidth wasn’t quite as large in the PMM test, but this is expected and is explained by the fact that edge diffraction on finite structures increases the bandwidth. The transmissivity of this FSS is within 2 dB of perfect transmissivity in the C band (4-8 GHz.) Finally the gain of the radiating array has a 2 dB variation over L band, and the gain of the entire antenna has a 3 dB variation over L band.