Was there a 1930s Meltdown of Greenland Glaciers? 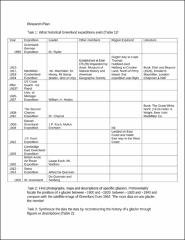 While recent climate warming is hypothesized to have caused acceleration of Greenland ice sheet outlet glaciers, 1920s through 1940s temperature anomalies were at least as equal in magnitude yet observations have not been compiled to confirm a 1930s meltdown. Mining The Ohio State University Libraries, this work compiles historical observations of glacier front positions and surface velocities from maps, photographs and other documentary evidence from mid 19th century Arctic expeditions. Of the glaciers reviewed, an acceleration and retreat indeed occurred during the 1920s warm period. The research put forth is thus consistent with a dynamical response in Greenland’s outlet glaciers to the “roaring twenties” warming.