Reproductive phenology of the Acadian flycatcher (Empidonax virescens), a Neotropical migratory bird species, across an urban to rural gradient in central Ohio, USA 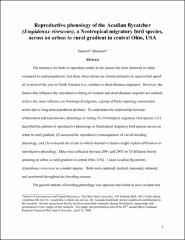 The tendency for birds to reproduce earlier in the season has been observed in urban compared to rural populations, but these observations are limited primarily to species that spend all or most of the year in North America (i.e., resident or short-distance migrants). However, the factors that influence the reproductive timing of resident and short-distance migrants are unlikely to have the same influence on Neotropical migrants, a group of birds requiring conservation action due to long-term population declines. To understand the relationship between urbanization and reproductive phenology or timing of a Neotropical migratory bird species I (1) described the pattern of reproductive phenology in Neotropical migratory bird species across an urban to rural gradient, (2) assessed the reproductive consequences of varied breeding phenology, and (3) evaluated the extent to which alternative factors might explain differences in reproductive phenology. Data were collected between 2001 and 2007 on 35 different forests spanning an urban to rural gradient in central Ohio, USA. I used Acadian flycatchers (Empidonax virescens) as a model species. Birds were captured, marked, measured, released, and monitored throughout the breeding seasons. The general pattern of breeding phenology was opposite that found in most resident and short-distance migrant birds. Birds arrived later, initiated clutches later, and finished nesting earlier than birds breeding in more urban forests. The combination of delayed clutch initiation and earlier completion of nesting activity resulted in an abbreviated nesting season associated with urbanization. Ultimately, this attenuated nesting season reduced the number of nests attempted and young produced by urban-breeding birds and shifted the timing of fledging, with the first fledglings being produced relatively later in the breeding season. The underlying causes of the phenological differences are less clear. One possibility supported by my data is that urban forests were disproportionately settled by small females, which initiated their first clutches later in the nesting season than larger females. This study provides the first evidence that urbanization is associated with attenuated nesting seasons for Neotropical migratory birds and that this shift in breeding phenology may have reproductive consequences.