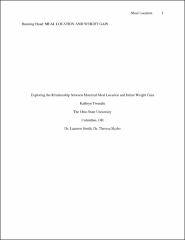 Exploring the Relationship between Maternal Meal Location and Infant Weight Gain. Background: For the first time in history, the current generation of children is projected to have a shorter life expectancy than their parents primarily because of children’s overweight status. Many factors place young children at risk for becoming overweight. The risk factors include: a family history of obesity, family lifestyle, diet sedentary living environments, and a lack of exercise. Purpose: To examine the relationship(s) between a mother’s mealtime habits, maternal BMI, the location of maternal meals, and infant weight gain at two months of age and at six months of life. Subjects: Mother and infant dyads (N=160) from three different pediatric clinics participated in the study. Racial and financial considerations were considered in clinic selection. Exclusion criteria required that the infant was: not born younger than 36 weeks, not hospitalized, not diagnosed with a genetic syndrome, and not diagnosed with a gastrointestinal disease or a metabolic disorder. Almost 60% of the mothers of the sample are African American, 34% are white, and 2.5% are Hispanic. The age of the mothers was positively skewed, and ranged from 15 years of age to 42 years of age, with a mean age of 24. Methods: Questionnaires were administered to each maternal participant at the 2 month and 6 month well-child visit. A series of closed-ended questions assessing maternal eating habits were included. It is hypothesized that mothers who eat their main meal at the kitchen or dining room table will have infants at average weight at 6 months of age and mothers who eat their main meal elsewhere would have heavier infants at 6 months of age. Descriptive statistics including frequencies, means and standard deviations as well as Pearson correlations will be conducted. Independent t-tests or chi-square tests will be conducted to compare differences between the mother groups, using p<.05. Plan: In order to analyze the data, we ran descriptive statistics to describe the sample including frequency, means, and standard deviations. To analyze the specific questions we used SPSS to run Pearson’s correlations with two tailed significance with a p value = .05 to examine the difference between the locations of mothers’ meal consumption with dependent variables of baby weight gain, and mothers’ BMI. We also ran a 3 way ANOVA to examine… Results: We found no statistically significant correlations between the mother’s BMI at 6 months and her meal score at 6 months. There was no statistically significant correlation between maternal meal scores at baseline or 6 months of age and infant’s weight gain by 6 months. However, we did find a weak positive correlation between the occurrence of adults in the household skipping meals or reducing meal size due to the lack of money and the mother’s BMI (Pearsons’s correlation = .178 where p<.05). Additionally, there was a weak negative correlation between infant weight gain from birth to 6 months and mother’s BMI (Pearson’s correlation = -.172 where p<.05). Conclusion: No significant correlations were found in response to the research questions, suggesting that the location of meals does not influence infant weight. However, other significant results that we were found may demonstrate the influence of eating habits and BMI.