An Exploration in Dramaturgy: A Comparison of Classical and New Work Dramaturgy 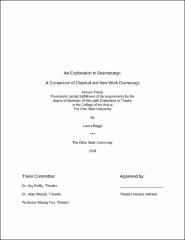 Dramaturgy
Much Ado About Nothing
New Work
Inspiration of Love

In the world of theatre, the least known and therefore least understood position is that of the dramaturg. In fact, most theatre-goers have never heard of a dramaturg. The dramaturg is the person on the production team for a play who researches everything the actors and director could possibly need to know in order to successfully perform the piece of theatre. The research covers everything from definitions and explanations of the text, to the history of the play and its various transformations, to information about the time period it was set in by the playwright and in some cases by the director. Due to the lack of undergraduate classes about dramaturgy and the dramaturgical practice, the only way a student at The Ohio State University can learn about dramaturgy is to dramaturg a show. I had the pleasure and challenge of dramaturging OSU’s Department of Theatre’s main stage production of William Shakespeare’s "Much Ado About Nothing", directed by Professor Mandy Fox, during the 2008 Winter Quarter. The research I did for the cast was extensive, as it was very important that the actors understand what they are saying and the world in which Shakespeare was writing. In addition to the background research, the director developed a concept which placed the production in a 1960s Beach Movie inspired world. Naturally, research to support her concept as well as inform the actors about the Beach Movies of the 60s was imperative. In contrast to my experience dramaturging a Faculty-directed main stage production, I was also the Dramaturg for a New Work by Akil Babb, fellow undergraduate student in the Department of Theatre. "Inspiration of Love" is a play dealing with interracial relationships, STDs, and the stress these factors put on love. The playwright wrote the play. My job was to do research in order to provide him with the facts needed to accurately portray the issues in the play. In addition to traditional research on STDs, I also contributed to the writing process by helping the playwright form and structure the play, as well as write the first drafts of the scenes which take place in the gynecologist’s office. These two dramaturgy experiences were then documented in my Thesis. My creative research also included being interviewed on the radio by Morning Edition Host Marilyn Smith on WOSU NPR News and Classical Music about the role of the Dramaturg in the theatre. In addition to my own discoveries through both processes, I’ve also relied heavily on the feedback of Professor Fox, the cast of "Much Ado About Nothing", playwright Akil Babb, and the cast of "Inspiration of Love". Their feedback was documented with surveys and interviews, and it has shown the importance of dramaturgs to the rehearsal process.