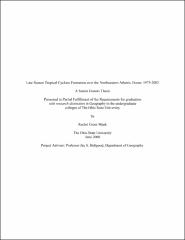 In the past thirty years, twenty named tropical cyclones formed in the northeastern Atlantic Ocean during the months of October, November, and December. By the accepted definition of a favorable environment for tropical cyclogenesis, most of them should not have developed. The past seven seasons produced ten of the twenty, with 2001 and 2005 spawning three and four systems, respectively. The study period begins in 1975, the year in which the Hebert-Poteat technique for satellite identification of subtropical systems was published. The northeastern Atlantic is defined as the portion of the Atlantic north of 20°N and east of 60°W. Purely subtropical storms are excluded from the study to focus on the conditions for tropical transformation. The climatology of the twenty late-season tropical cyclones (LSTCs) is discussed including the peak development periods, location, maximum strength, and type of non-tropical origin. LSTCs in this region arise from four unique origins, providing a method for classification. Type I storms originate as pre-existing, non-frontal and non-tropical cyclones. Type II systems develop along dissipating frontal systems. Type III LSTCs develop directly from an occluded frontal cyclone, while Type IV developments begin with tropical origins. Thirteen of the twenty systems are Types I and II, and the remaining systems are split relatively evenly between Types III and IV. The environment of each LSTC is examined over the 24 hours prior to attainment of tropical storm status. Wind fields and temperature profiles are calculated on a 13x13 point Lagrangian grid. Wind shear is calculated for the 850-200 hPa, 850-300 hPa, and 850-500 hPa layers. The shear values are averaged on 3x3 point and 1x1 point grids for quantitative comparison of systems. Each system’s synoptic environment is visualized on a 41x21 point Eulerian grid centered on (30°N, 50°W) over the 36 hours before genesis; of particular interest are the locations of upper-level troughs, ridges, and upper-level cold lows. With these data the conditions conducive to the formation of LSTCs are analyzed.