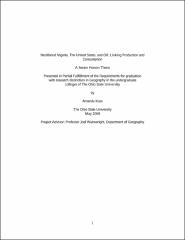 Despite the 2007 findings by the Intergovernmental Panel on Climate Change and other signs that human-induced climate change is occurring, states have accomplished little to reduce energy consumption. Most proposed solutions to climate change fail to substantially reduce energy consumption in the global north. This paper seeks to understand the political economy of oil under neoliberalism, by examining the connections between oil production in Nigeria and consumption in the USA. More narrowly, I consider how the rise of a new militant anti-oil group in the Niger Delta region, the Movement for the Emancipation of the Niger Delta (MEND), and alternative energies being explored in the United States are both responses to depleting fossil fuels. The paper argues that neoliberal policies have contributed to extremes between socioeconomic groups at all scales. Thus, the prospects for addressing global warming have been reduced/worsened by the hegemony of neoliberalism.